People who code: we want your input. Take the Survey

What is a Ricardian Contract?

Just what is a Ricardian contract in simple English? How do they work with EOS? A straightforward example would be nice.

The idea of a Ricardian contract is to define what the smart contract should do and how it should behave.

If you had a "To do app" contract for example which lets people mark what is on their to do list.

complete - Is to mark an accounts to do item as complete, only the account owner and no one else has permission to do this.

One of it's purposes is to provide clarity as to what should have happened should something go terribly wrong.

A classic example would be the Ethereum DAO where in June 16 hackers took a large amount of funds from it which was crowd-funded. This event was so big it was enough to split the Ethereum network into 2, Ethereum and Ethereum Classic over the political differences arose from it.

Had this happened on EOS, arbitrators can simply read the Ricardrian contract, tell from the start such event was clearly never meant to happen and a bug in the software has been exploited, and then perform the actions necessary to reverse the transactions and perhaps freeze the contract until patched.

The Ricardrian contract accompanies the smart contract itself during deployment onto an EOSIO blockchain.

If you want some visuals, Ian Grigg (partner at block one) is the creator of the Ricardian Contract and co-wrote a white paper which goes into detail. Specifically the diagram on page 9, and the case studies on pages 29-34

If you want some visuals, Ian Grigg (partner at block one) is the creator of the Ricardian Contract and co-wrote a white paper which goes into detail. Specifically the diagram on page 9 (below), and the case studies on pages 29-34 provide 3 examples of potential use cases.

And finally, Thomas Cox did a video 2 months back about Ricardian Contracts. 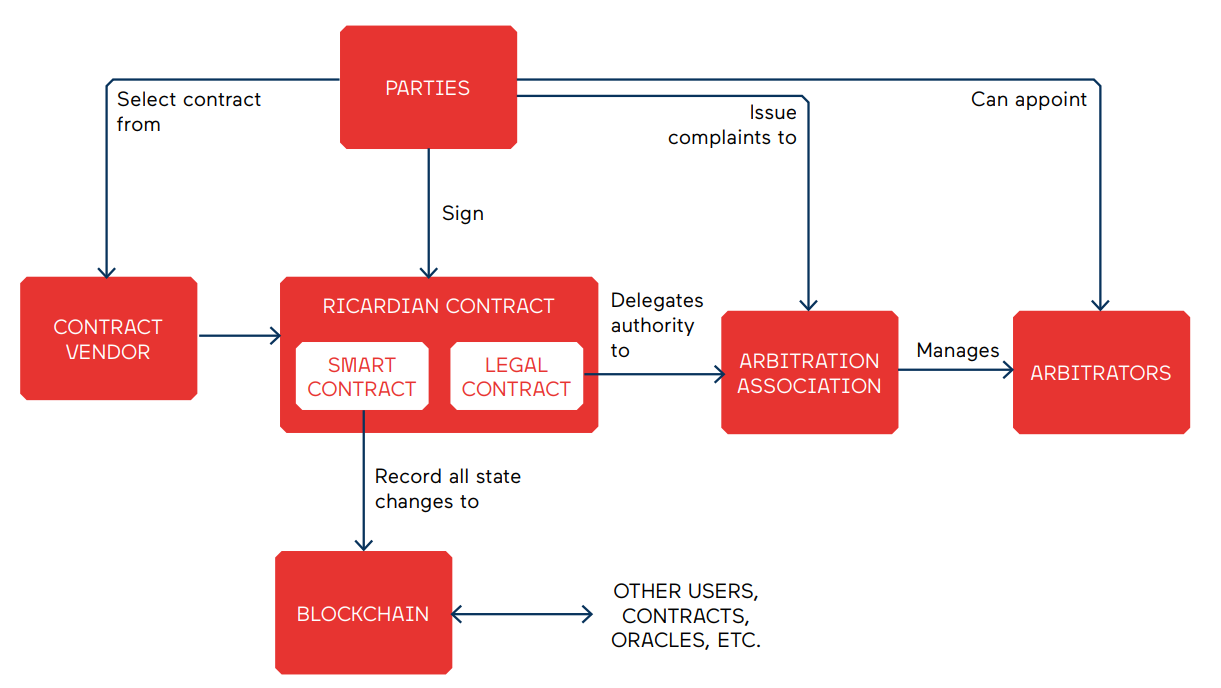 Article XII of the constitution:

Open Source Each Member who makes available a smart contract on this blockchain shall be a Developer. Each Developer shall offer their smart contracts via a free and open source license, and each smart contract shall be documented with a Ricardian Contract stating the intent of all parties and naming the Arbitration Forum that will resolve disputes arising from that contract.

Not the answer you're looking for? Browse other questions tagged ricardian or ask your own question.

2
Which variables can be used in ricardian contracts?