What are blockchain producers’ incentives to add additional RAM?

If payments for RAM go to the network as a whole, what is the incentive for block producers to increase their physical RAM?

BP's will want to increase the RAM available when the % of RAM used for applications reaches a significant percentage of the total RAM currently held.

For example, less than 2% of RAM is being used for real applications. That means that the majority of RAM is currently unused, people are just holding the option to use it.

When the RAM used by real contracts surpasses say half way (32GB) (which there is no exact way of telling because speculators could easily fill their RAM) then they would want to bump the RAM needed.

IPFS will likely be supported before that happens. IPFS is where files will be stored. Sites like steemit, and dtube currently use it. IPFS will be staked like NET/CPU. This will significantly bring down the need for developers to use RAM because we're currently using it for things that could be stored in IPFS. Less demand will mean a lower price with a consistent supply.

However, what Dan has just proposed they do for now is "grow the RAM at the rate of 64GB per year (1 KB per block)" . Dan has also suggested the idea of messing with the bancor algorithm which can only mean a few things. One is increasing / decreasing the CW (connector weight, see Bancor wp). The higher the CW, the less volatility (100% is stable like tether) and vice versa (10% would rise exponentially as supply is purchased).

There is also the idea of a relay and array token. These tokens could connect to the RAM market, like say ETH or BTC and provide more stability. They would add more stability by increasing the CW by adding more tokens to the connector balance. 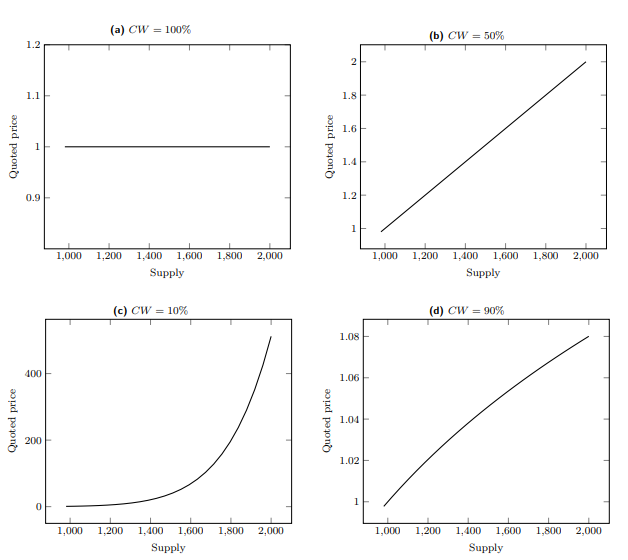 Not the answer you're looking for? Browse other questions tagged block-producer ram or ask your own question.