What is Block ID (from cleos get info)?

I am trying to interrogate the chain more to find what is being stored. I get an ID of

What is that exactly?

Also in ethereum we have hashes in headers to maintain the reliability and then the Merkle tree. Is there something the same in EOS? Can I use this data such as "previous" and "action_mroot" to find out more what is being stored on the blockchain?

What is Block ID?

It's a hash of the block header according to libraries/chain/block_header.cpp:

Also in ethereum we have hashes in headers to maintain the reliability and then the Merkle tree. Is there something the same in EOS?

Yes, there are several such mechanisms: 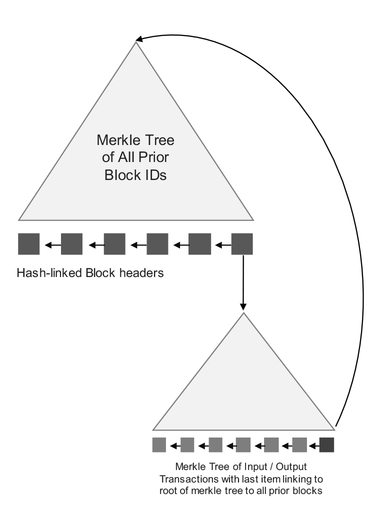 Can I use this data such as "previous" and "action_mroot" to find out more what is being stored on the blockchain?

You can use Merkle roots for generating Merkle proofs if you're operating a thin client and you want to verify if a transaction was included in an irreversible block without downloading the blocks. But, yes, you can use previous to query the block that the current block points to.

However, if you want to explore data in the blockchain, you can, more simply, query blocks by block number, which is a counter increcemented by 1 for every block in the blockchain. Example:

Would give you the 10,000,000th block produced along with all transactions included inside (but not all inline actions).

Not the answer you're looking for? Browse other questions tagged cleos or ask your own question.

2
Get cleos without building EOS?
2
Where we can get inline action info for buy ram contract?
5
why core_liquid_balance field not show at cleos get account?
2
Where can I get all the cli commands for the cleos wallet from block.one?
5
How to verify signature from $ cleos get block BLOCKNUM
1
Block Meta Data
0
get data from a smart contract
1
`cleos get table` not returning vector<string>
1
How to get Block Number