Why is the difference of current block height and irreversible block higher than 180?

Last irreversible block (LIB) is the way of providing BFT finality assuming at least 2/3+1 honest producers. However, a single confirmation from a BP is not sufficient proof to contribute to making an irreversible block--this would mean that when the last of the 2/3+1 BPs signs the block, it's immediately irreversible. However, by the time the other (honest) BPs are informed about this, there is a chance that they may sign a different LIB on a different fork because of imperfect network connection and fewer than 1/3 byzantine producers. This would make finality not guaranteed under BFT requirements.

Therefore, the algorithm for LIB consists of a pre-commitment phase and a commitment phase. In other words, the first 2/3+1 BPs sign for a proposed LIB, but then the 2/3+1 BPs have to sign once again to acknowledge that the proposed LIB was signed by a supermajority and it can now be made irreversible safely.

Note that this delay can be theoretically reduced to a few seconds if BPs communicate both commitments for current round and pre-commitments for next round at the same time rather than inferring commitments based on block headers at a later time. This, however, requires additional computational and network resources, and it is not yet implemented.

The algorithm as described by Dan is as follows: 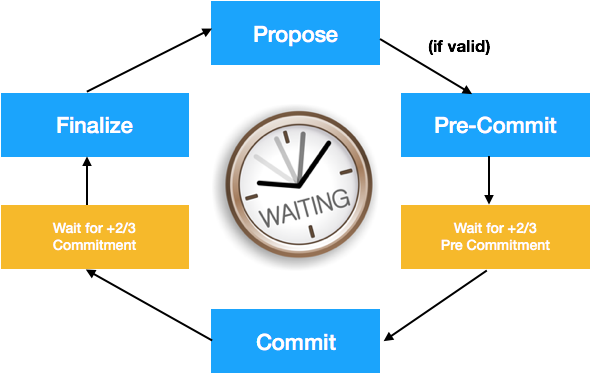 I see many cryptocurrency exchanges like Huobi and Binance credit EOS deposits to a client’s account after only one confirmation.

Yes, I assume those exchanges may be willingly accepting the unquantified risk associated with accepting those transactions, or they believe the risk is insignificant. Given that those exchanges are often listing PoW coins that can be 51% attacked for a cost lower than $1,000/hour in hash power renting, I would assume that either their risk tolerance is quite high or their legal agreements are designed to share liabilities with their users in exchange for better UX. Further, Dan often reassures users that the "probability that a produced block will reach finality is already 99.999% which means that the average user gets near-certain finality in under a second." (source), which may reassure exchanges, but I'm not aware of any compelling public attempt of supporting that number despite existing in the whitepaper in a similar form as well. Perhaps they adjust their confirmation times if the value deposited is high enough to present a notable risk if it were reverted?

There is a similar discussion here.

Not the answer you're looking for? Browse other questions tagged consensus dpos irreversible bft lib or ask your own question.

3
What will happen with database and inline transaction when a transaction doesn't get 2/3+1 in the end?
2
When can I consider a transfer is confirmed?

8
How long on average before a transaction included in a block is final and irreversible? (without BFT msgs)
1
How exactly is the block height defined in EOS?
6
How to make transaction atomic in EOS?
3
Why are there only 21 validation nodes and not more?
3
What will happen with database and inline transaction when a transaction doesn't get 2/3+1 in the end?
1
What is the difference between witness node and ordinary node
2
What does it mean that block is irreversible
1
Is it possible to produce more than a block for a block producer at the same scheduled time?
1
Is it possible to change order of transactions in block and send them to validators individually?
0
How to get the Block Irreversible status?