How I can understand round-robin in DPOS?

DPoS is a system in which a fixed number of elected entities (called block producers or witnesses) are selected to create blocks in a round-robin order.

This is how it's supposed to work:

Bp 18 will continue to miss blocks on their scheduled blocks until 24 hours have passed in which they will be removed from rotation.

The next BP (bp 19) will build on top of what they know to be the block of highest height.

The EOS.IO software enables blocks to be produced exactly every 0.5 second and exactly one producer is authorized to produce a block at any given point in time. If the block is not produced at the scheduled time, then the block for that time slot is skipped. When one or more blocks are skipped, there is a 0.5 or more second gap in the blockchain.

If a producer misses a block and has not produced any block within the last 24 hours they are removed from consideration until they notify the blockchain of their intention to start producing blocks again. This ensures the network operates smoothly by minimizing the number of blocks missed by not scheduling producers who are proven to be unreliable.

This is how it actually works: 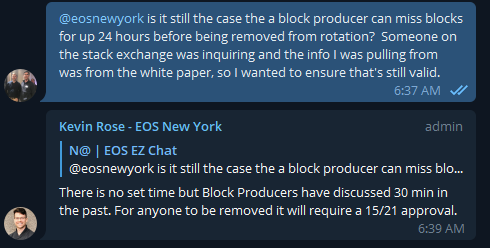 6
What are the potential fall outs of old DPOS+LIB algorithm?
11
How often/consistent are blocks on EOS?
7
In a DPoS system if the majority of producers become corrupt how does the community vote them out?
3
How to become an EOS Block Producer Candidate?
2
What does the "is_active" mean in the block producer list?
1
How can EOS prevent collusion of block producers?
1
How does EOS and dPOS stop a rogue node corrupting data?
1
How Does Round Robin BP Selection Work In EOSIO?
0
Are the block producers shuffled between rounds in new hybrid DPoS + BFT